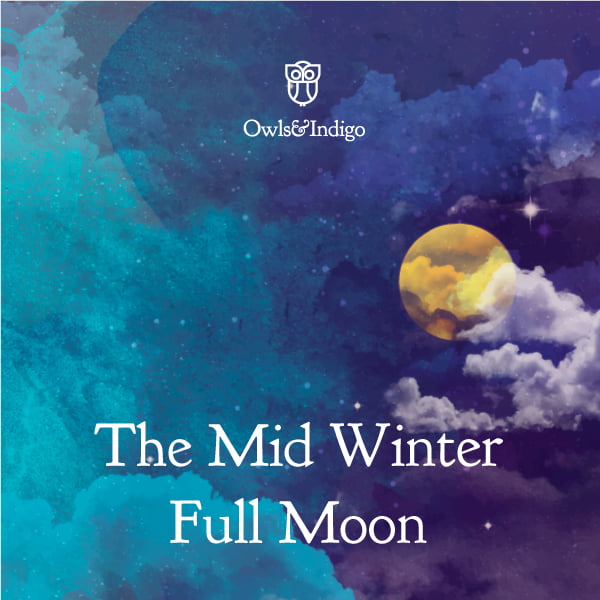 In the Northern Hemisphere the full moon of January and Mid Winter corresponds to the hunger experienced in the dead of winter, nearing the mid-winter sabbat holiday, Imbolc.

At this time of year Indian tribes and Colonial settlers would hear wolves howl and cry in hunger outside of their settlements and know that the wolves would be more fierce and daring due to their growing empty stomachs. If the settlers ventured beyond their homes, they would have to be more vigilant and extra careful for fear of a wolf attack.

The Wolf Moon is the full moon that happens in January between the holidays Yule and Imbolc. This is the moon that told our ancestors who lived off the land that it was a time to be most careful when venturing outside of their homes and be vigilant for hungry wolves trying to find food in mid-winter.

Growing up on a Mid-Western farm, this was a fun time for us as children. The snow had a fresh glaze of ice that made it easy for us to walk above the snow, we would build snow tunnels in the drifts, and play outside until our cheeks were rosey and ice cold. But it wasn’t all fun, this time of year we couldn’t be out after dark, just in case a daring predator wandered up to the house or in the fields where we would play in the snow.

January was also an important time for the safety livelihood of our animals. Predatory animals became scavengers this time of year since, and there was little food for them to hunt they turned farms which had animals that were an easy kill. If we weren’t careful and vigilant over our animals, making sure to lock them into their barns and roosts each night, they would fall victim to those scavengers. Leaving us with little or no animals to keep our family through the winter. If our animals weren’t protected, then they would be eaten by wolves (in our case coyotes), leaving us with little or no chickens to eat and gather eggs from for the spring and summer months.