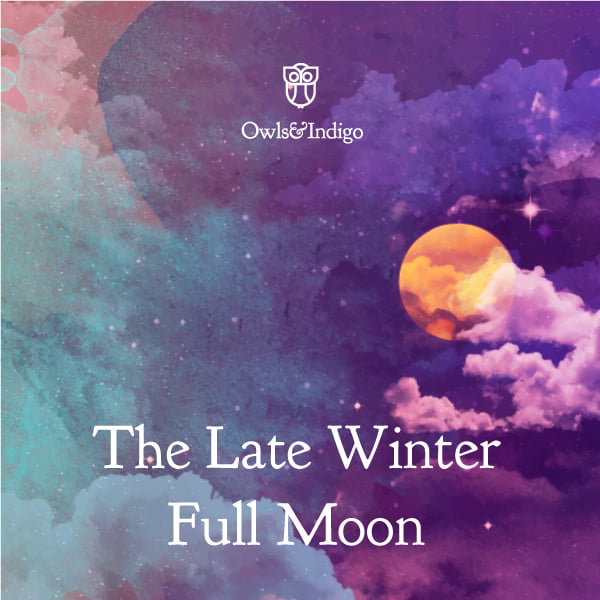 In the Northern Hemisphere the full moon of February and the holiday Imbolc corresponds with signs of life returning to the frozen Earth, new lambs being born, and crocus flowers peeking through the snow, but also with the heaviest snow of  Winter. Farmers & Gardeners are beginning to prepare seeds for the coming Spring while keeping an eye out for early babies being born as it begins to warm up.

The Hunger Moon is the second full moon of the year and the full moon that happens on the date closest to the holiday Imbolc. This is the moon that told our ancestors who lived off the land that trapping and hunting was going to be difficult and to prepare for a food shortage. The most common signs of The Hunger Full Moon are food stores running low, new lambs being born, heavy snow, and crocuses. The Colonial Americans called this moon the Trapper’s Moon, I’ve heard this growing up on a farm in Midwest Illinois. The Sioux call this moon the Moon of the Raccoon, a great totem animal for anyone needing guidance through the darkness.

Growing up on a Mid-Western farm, this was still a rather cold time of year. We would spend recess outside in the snow and play king of the mountain with our friends before it was time to head back inside. In school we would keep busy with homemade valentines for our friends and loved ones. As for our farm, we would still need to be sure to lock our animals up tight at night away from the scavenging predatory wild animals of the Mid-West, in our case coyotes. If our animals weren’t protected, then they would be eaten, leaving us with little or no chickens to eat and gather eggs from for the spring and summer months.